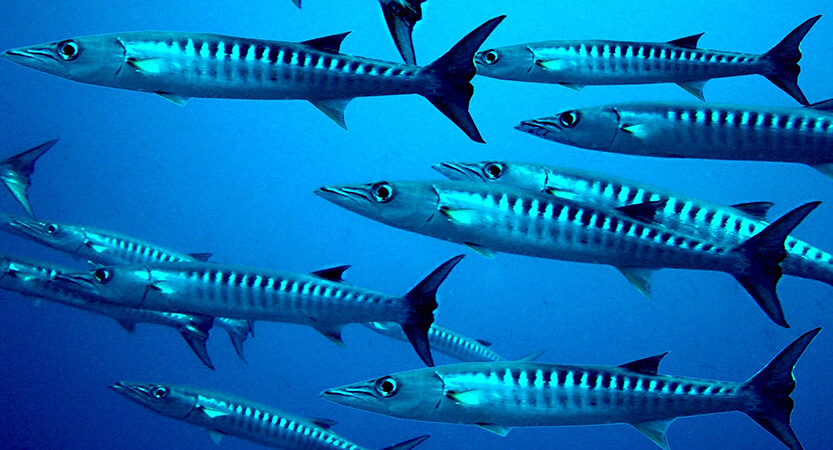 The family and genus of fish called Barracuda or Sphyraena, includes about 27 species. The fish has a cylindrical, elongated body. In common forms, it is similar to an ordinary pike. A distinctive feature of the species is its powerful lower jaw, the front edge of which protrudes strongly relative to the upper. The anterior dorsal fin has five spiny rays. The jaws are covered with large fang-shaped teeth. The midline is very well defined. The dimensions of barracudas can exceed 2 m in length and 50 kg in weight.

Barracudas are active predators, very voracious. Small fish, as well as various mollusks and crustaceans, can become the object of hunting barracudas.

The fish are quite aggressive, there are known cases of injuries in fishermen and divers from “communication” with these predators. The lifestyle is quite diverse and changeable. Large individuals, most often, stand apart, waiting for prey in an ambush. Barracudas can form large flocks for hunting together. So they attack schools of fish, driving prey into a dense flock. Attack at high speed, snatching victims or tearing pieces of flesh with powerful jaws.

Barracudas are quite widespread in the tropical and subtropical zones of the oceans. Young individuals, more often, can be found in the coastal zone, sometimes barracudas are found in the estuary zone of rivers. Many say that barracudas avoid troubled waters. There are some restrictions on eating barracuda meat. In general, dishes from young barracuda are very tasty, but there are cases of poisoning with meat of large barracuda, especially from the waters of Central America.

Information about the breeding of barracudas is a bit confusing and contradictory. The maturity of fish occurs in 2-3 years of life. It is difficult to determine the spawning season. According to some sources, barracudas spawn all year. Most likely, the spawning period depends on the region and population. Spawn occurs in the pelargic zone. After fertilization, caviar swims freely in the upper water column and is devoured by other fish, therefore the number of surviving individuals from the litter is relatively small.

Barracudas are caught in various ways. These are the main methods of fishing from marine boats: drifting, trolling, sea spinning. Barracudas are illegible in objects of hunting, often attacking a rather large victim. In most cases, methods of catching barracudas are associated with artificial baits, but some fishermen catch them in pieces of fish. Barracudas are aggressive predators, they sharply attack the bait, and therefore such fishing is characterized by a large number of emotions and stubborn resistance of the fish. It is worthwhile to prepare for prolonged survival and struggle, in which it is difficult to predict the result.

Barracudas, due to their size and temperament, are considered a worthy adversary. To catch them, the most serious fishing tackle will be required. To search for fish, a method such as trolling is most suitable. Sea trolling is a way of fishing using a moving motor vehicle, such as a boat or yacht. For fishing on ocean and sea open spaces, specialized vessels equipped with numerous devices are used. The main are the holders of the rods, in addition, the boats are equipped with chairs for fishing, a table for making baits, powerful echo sounders and more. The rods are also used specialized, made of fiberglass and other polymers with special fittings.

Reels are used multiplier, maximum capacity. The device of trolling reels is subordinated to the basic idea of such gear – strength. monofilament line, with a thickness of up to 4 mm or more, is measured, with such fishing, by kilometers. There are a lot of auxiliary devices that are used depending on the fishing conditions: for deepening equipment, for placing lures in the fishing area, for attaching bait, etc., including numerous elements of equipment.

Trolling, especially when hunting for marine giants, is a group type of fishing. As a rule, several rods are used. In the case of a bite, for a successful capture, coherence of the team is important. Before the trip, it is advisable to learn the rules of fishing in the region. In most cases, fishing is carried out by professional guides who are fully responsible for the event. It is worth noting that the search for a trophy at sea or in the ocean can be associated with many hours of bite waiting, sometimes unsuccessful.

Fishing, also, most often occurs with boats of various classes. Many anglers use spinning gear to catch barracudas. For gear, in spinning fishing for sea fish, as in the case of trolling, the main requirement is reliability. Reels should be with an impressive supply of fishing line or cord. In addition to a trouble-free brake system, the reel must be protected against salt water. Spinning fishing from a boat may differ in lure feeding principles. Many types of marine fishing techniques require very fast wiring, which means a high gear ratio of the winding mechanism. According to the principle of action, the reels can be either multiplier or inertialess. Accordingly, the rods are selected depending on the reel system. When fishing for spinning sea fish, the fishing technique is very important. In order to select the correct wiring, consult with experienced local fishermen or guides.

Drifting sea fish involves the use of specially equipped boats or yachts with holders for rods. It is worth considering that the size of trophies can be very significant, which requires special training from the fishing organizers. Fishing is carried out using marine fishing rods with accessories for natural baits. The “drift” itself is carried out due to sea currents or wind. In most cases, fishing is carried out with the lure of predators by various bites of animal composition. On a snap, some anglers use bite alarms in the form of large floats. The slow movement of the vessel increases the fishing area and creates an imitation of the movement of the bait, although many anglers note that the barracudas also capture the “dead” fish.

For the fishing of barracudas, traditional sea lures corresponding to the type of fishing are used. Trolling, most often, is caught on various spinners, wobblers and silicone imitations. Natural nozzles are also used, for this, experienced guides make baits with the help of special equipment. Catch barracuda and live bait. When fishing for spinning, various sea wobblers, spinners and other artificial imitations of aquatic inhabitants are more often used.

Where to catch barracuda

Barracudas are heat-loving fish. The main habitat is the waters of the Pacific, Atlantic and Indian oceans. As a rule, keep closer to the surface. There are four species in the Mediterranean Sea, two of them got there through the Suez Canal from the Red Sea. Sometimes they are seen off the Turkish coast. On the ocean, barracuda is a typical trophy of fishermen, both on an industrial scale and in amateur fishing. In the Sea of Japan, is also not an unusual catch.