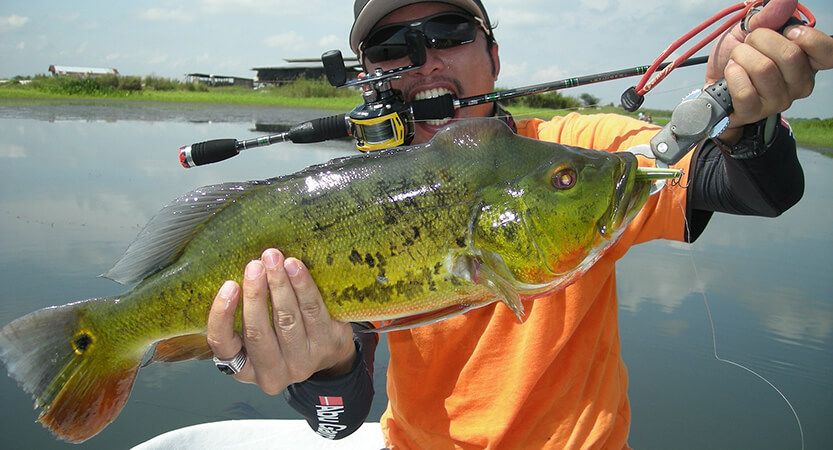 Peacock bass, pavon, peacock pavon, or cichla – this is not all the names that are used in the Latin American and English-speaking environment, in relation to large, brightly colored fish of the cichlidae family. Fishing names, the terms are often mentioned: peacock perch or butterfly perch. In recent years, aquarists have shown great interest in these fish.

In their environment, when describing different subspecies of tropical freshwater perches, Latin terms are more often used. There peacock perches are named after the family: cichl, cichlid. This is a very variable look. When describing various subspecies, add-ons are often used, such as spotted, mottled, and others. Despite the fact that this fish is well-known, scientists do not always have a single opinion on how to distinguish between numerous forms, subspecies or divide into separate species. In addition, it is known that throughout life, when conditions change, fish change not only in size, but also in body shape and color, which also complicates the classification. Sometimes mentioned in the description such terms as: giant, small and so on.

Common features of peacock bass can be considered a short body, similar in shape to most perches, a large head with a large mouth. The dorsal fin has hard rays and is divided by a notch. The body is covered with numerous spots, transverse dark stripes and more. For pectoral, ventral fins and the lower half of the caudal, a bright red color is characteristic.

It is worth noting that, a common feature of all South American cichlids is the presence of a dark spot, in a light frame, on the tail of the body. This “protective eye”, in different fish, is expressed to a greater or lesser extent. This is probably an element of protective coloring, which restrains other predators, such as piranhas and others. Peacock fish are characterized by sexual dimorphism. This is expressed in some elements of the color, as well as formations in males of the frontal growth. Although some researchers point out that similar growths occur in females.

Fish prefers to live in slowly flowing sections of the river, among algae and snags, flooded trees and other obstacles. Inhabits areas of the bottom of rivers with sandy or fine-gravel soil. At the same time, the fish is very thermophilic, demanding on water quality and oxygen saturation. In the case of anthropogenic impact on the reservoir, for example, when organizing reservoirs, the population is sharply reduced. One of the reasons is that peacocks do not compete well with new, universally established species. But at the same time, the fish acclimatized, after artificial migration, in the waters of South Florida. There is currently no threat of extinction, but some small populations are still at risk.

Young individuals often form small clusters, larger ones, live in pairs. The size of the fish can reach about 1 m in length and 12 kg in weight. Peacock bass feed not only on fish, but also on various crustaceans and other invertebrates, including those falling to the surface. Large individuals attack birds and land animals that have fallen into the water. Fish prefers ambush hunting methods, but at the same time, actively moves in all water strata.

Fish become sexually mature at the age of 1-2 years. Before spawning, cichlids clean the surface of snags or stones, where the female spawns eggs, and then, together with the male, protects the laying of eggs and juveniles. Portion spawning, lasts for a day. After young fish go on an independent existence, they may well be eaten by their own parents.

This fish got the most popularity due to sport fishing. Fish is of particular importance to local fishers. The most important point in fishing for pavons is the search for fish habitats. In recreational fishing, spinning and fly fishing gears are commonly used. The popularity of this species of ichthyofauna among tropical fishing enthusiasts lies not only in the inaccessibility of the places where it lives, but also in the aggressiveness of the fish itself during attacks. At the same time, peacock perches can be very cautious and finicky, behave very actively during serifs and often go off the hooks. Another attractive point when hunting these fish is the large number of baits that the fish react to, including from the surface of the water.

The determining factor in choosing spinning gear is the fishing conditions on the rivers in the rainforest. In most cases, fishing takes place from boats; large and voluminous imitations of hunting objects serve as bait. Fishing conditions may require long-distance, accurate casting at numerous obstacles – flooded forests, snags, overhanging trees and more. Including, often forced forcing and hard, clear cuts are often needed. Most experts advise using fishing rods of the fast, medium fast class.

A large number of specialized versions of forms for various animations of baits, including surface ones, are currently being produced. Therefore, the fisherman has the right to choose, taking into account his experience. Fishing, in a tropical river, does not make it possible to localize on only one type of fish, so tackle should rather be universal, but with a large “strength factor”. This applies primarily to used fishing lines, cords, leashes and various accessories.

The reels must have a trouble-free braking system, the modification options may be different and depend on the preferences and experience of the fisherman. Do not forget that peacock perch trophies can be very large.

Fishing for tropical freshwater fish species is becoming more and more popular with the fly fishing community. Fishing is quite different and requires additional skills, even for fly fishing enthusiasts with experience of fishing predators in salmon and other difficult waters. The approaches to gear selection are similar, as for spinners. First of all, this is the reliability of the reels, a large number of backing and powerful one-handed rods of high classes. Peacock bass, among fishermen, has a reputation for being a “freshwater bully” who breaks gear and “brutally” destroys baits. Before the trip, you need to clarify which particular bait is best used in this region, in a particular season.

The choice of spinning lures, first of all, depends on the experience of the fisherman. Fish respond to most baits produced, but reliability is an important consideration. The probability of catching fish on silicone baits is quite high, but whether it will remain intact after a bite is a big question. In addition, it is important to understand that due to the large number of competitive fish species, with baits made of fragile materials, dealing only with changing nozzles, you may not have to wait for the capture of the coveted trophy. The same applies to fly fishing, streamers used when catching butterfly perch must be very durable, with strong hooks and in sufficient quantity. It may be wise to bring along additional materials and knitting tools.

The distribution range of pavons, cichlids, peacock basses occupies a large area of the rivers of South America, in Brazil, Venezuela, Peru, Colombia and other states. Among the rivers worth mentioning: the Amazon, Rio Negro, Madeira, Orinoco, Branco, Solimoes and many other rivers of their basins. But distribution zones can be limited due to natural reasons or as a result of human activity.