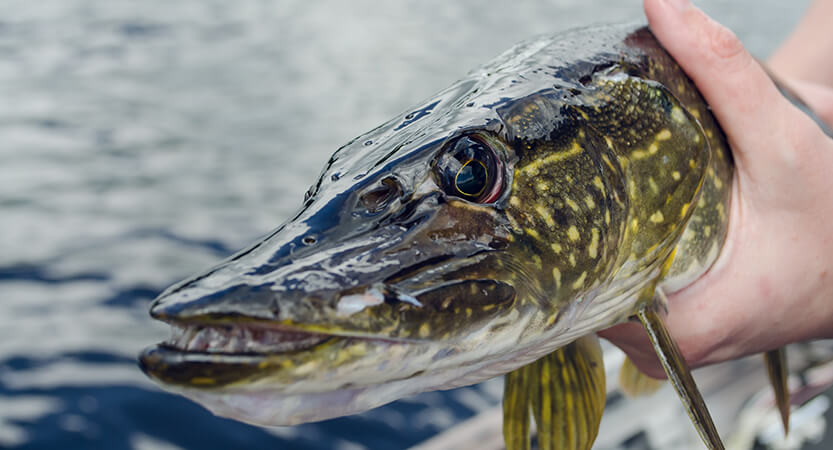 There is a lot of information about huge pikes of incredible size. Note that at present, ichthyologists, for the most part, believe that the real size of pikes can reach 35-40 kg. Most of the trophy specimens in the catches of amateur fishermen are in the range of 12-15 kg. The largest specimens are usually found at the mouths of large rivers. The fastest growing specimens are found in warm regions.

A pike becomes sexually mature by 2-3 years. In northern and slowly growing populations, maturation can last up to 4 years. Spawns earlier than most fish with which it lives in a reservoir. This happens immediately after the breakdown of ice in a shallow zone. Spawn passes quite noisily. The main problem of spawning in the shallows is the drying of eggs and larvae, due to the departure of flood water. But the development of larvae is very fast, compared with other fish.

Despite the fact that the pike is considered an “ambush” predator, it is caught in various ways, sometimes in “completely non-standard places.” In this case, both natural and artificial baits are used. For this, various methods are used: starting with the simplest stationary tackle, stakes, adjustments to special rods with complex snap-ins for fastening the “dead fish” and bait fish or just “floats”.

The most popular fishing methods for this fish, among most anglers, are considered to be fishing with artificial baits, with spinning rods. Although, for the same purpose can be used fishing rods for plumbing or the most common “deaf” fishing rods. Pike are caught, very successfully, and fly fishing. Separately, it is worth pointing out that trolling (pike) is popular in large bodies of water.

Pike, in its behavior, is a very “plastic” fish. It can survive in any water bodies, even in the case when its own juveniles will be the main food. It is located at the top of the “food” pyramid, practically in all water bodies and can hunt in any environmental conditions. A huge number of lures are connected with this, including for spinning.

The main criteria for choosing a fishing rod, in modern fishing, for spinning, is considered the fishing method: jig, twitching and more. The length, system and test are selected relative to the place of fishing, personal preferences and the lures used. Do not forget that the rods with a “medium” or “medium – fast” system, “forgive” a lot more mistakes than a “fast” system.

Reels and cords are desirable to purchase, respectively, the selected fishing rod. In practice, fishing for any size requires a variety of leashes. Pike’s teeth cut any line and cord. To protect yourself from loss of bait and loss of trophy, there are various ways and types of leashes. The gears with the use of multiplier reels stand out separately, sometimes with the use of huge baits, such as jerk-bait.

Catching pike on “live bait gear” and “dead fish” somewhat “faded” against the background of modern gear for spinning and trolling, but no less relevant. Fishing for “trolling” also began with fishing with a “dead fish” – “for a troll”. The drawing of the “dead fish” was practiced behind a rowing boat, but yielded to lures and other artificial baits.

For fishing on live bait, various gears are used, some very simple. The traditional “circles”, “reunions”, “deliveries”, and girders are used. “Live bait” fishing can be carried out both in a slow course and in reservoirs with “standing water”. Most gear involves a hook (a single, double or tee), a metal leash, a sinker. Quite fascinating is fishing in mugs or “stakes” when fishing is done from a boat, and gear is installed in a particular sector of the reservoir or slowly rafting along the river.

Catching a trophy pike can be more successful if you use motor boats and search tools – various digital devices. Trolling is suitable for this. If you do not consider trolling as a special hobby, you can catch using this method using ordinary spinning rods, rowing boats with a partner or motor boats at low speed, especially with the help of electric motors. Some special adaptations are not required, and the selection of lures is carried out depending on the conditions of fishing.

Almost any pike actively responds to natural baits: fish slicing, dead fish and live bait. A small or “fattening” predator does not refuse a large worm – creeping out, clam meat and other things. For pike fishing, dozens of different types of artificial lures have been invented. Of the most famous, we will name various oscillating, rotating spinners, for sheer spinning, wobblers, poppers and their specialized subspecies. No less popular are baits made of silicone, foam rubber and other synthetic materials, various hybrid baits made up of several elements.

Where to catch pike

Pike lives in Asia, Europe, North America. Moreover, in all these territories, there are separate regions or river basins where this fish is absent. As already noted, this species of fish is highly plastic. Pike is not demanding on the conditions of the reservoir, aggressive and gluttonous. The main criterion for the prosperity of a species is the availability of food supply.

Basically, this is an ambush predator, but ambushes can suit almost everywhere. Often, pike can be caught in the lake, just “walking” through the space of the reservoir, especially if there is a lot of food competition. In general, to search for fish, it is desirable to know the presence of eyebrows, bottom drops, snag, stones, vegetation thickets and so on.

On rivers, pike, among other things, can get up at the edge of the stream or at places of a sharp change in flow velocity. The trophy pike occupies the deepest pits, but goes out to feed and can be caught in the shallows. Especially during the seasonal zhora.