How Long Does Perch Live 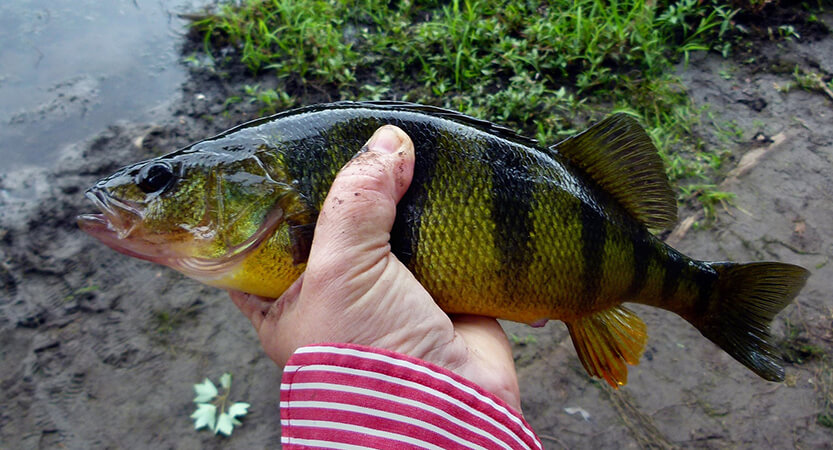 Perch is the most widespread predator of our water bodies: it is almost ubiquitous. Even a novice fisherman is unlikely to confuse this fish with any other – the characteristic stripes, spindle-shaped body and dense scales give the freshwater robber a characteristic look. For the most part, small individuals come across the bait and spinning, but sometimes the fishing happiness smiles, and a very solid specimen becomes the prey. How many years did this perch live to grow to this size?

Today, the subject of our conversation will be life expectancy and other features of this fish, remarkable in all respects. We will get acquainted with the river perch (not to be confused with the sea, this is a completely different species!), Study a little its habits and admire the variety of its appearance. As a result, we will find out how many years a perch can exist in its natural habitat, and we will try to determine the real age of a caught specimen in domestic conditions, without resorting to complex specific methods.

Before us is an amazing predator, capable of adapting to the most severe living conditions: limited food supply, low temperatures, not too clean water. If necessary, it can live long enough without water, provided that the humidity of the environment remains. The perch is able to break all the records of adaptability among predators, in terms of vitality being inferior only to the recognized champion, the peaceful crucian carp.

His life, like the existence of other representatives of freshwater ichthyofauna, has a strict seasonal cycle, but it is not as pronounced as that of most of its neighbors in the reservoir. Perch is active almost all year round, even in the deaf winter, when other fish falls into a state close to suspended animation. It strays into huge flocks and migrates to deep areas, but periodically comes out closer to the surface for hunting. The perch feeds constantly and year-round, even during the spawning period: not all mature individuals are capable of reproduction annually.

In summer, perches live in groups at shallow depths, often finding prey and shelter in coastal thickets. In a fit of hunting excitement, they sometimes jump out of the water, chasing potential prey across the reservoir with the whole flock. The exception is large individuals, the so-called “humpbacks”: they live at deeper depths (5 or more meters) and hunt exclusively alone.

The favorite time of day of this predator is the period of transition from night to day and vice versa – it is at dawn and dusk that he most zealously hunts for all kinds of fish trifles. It retains some activity during the day, going into thickets or to depths only during the period of the greatest heat. At night, the perch prefers to rest, yielding the hunting arena to other predators, for example, a close relative, pike perch.

You can start catching this predator in any season: even when mastering the basics of fishing, you are unlikely to be left without prey, especially if your bait attracts a flock of grass perch.

The perch’s life cycle begins with the laying of eggs by the female and fertilization by the male. This occurs in early spring, when the water warms up to 7-8 o C. At one time, the female is able to spawn from 12 to 300 thousand eggs. Such a large interval is explained by the different sizes of females due to their age and phenotype (race).

The larvae emerge from the eggs about two weeks after fertilization. In the early days, they feed on the remains of the yolk, supplementing the diet with phytoplankton. Gradually, they move to zooplankton, and then to the prey of ever larger crustaceans, molluscs, larvae, and so on. After a few months, after the appearance of characteristic stripes and reaching 2-2.5 cm in length, the larva passes into the rank of fry.

A lot of perch perish in the first months, and the cause of death of juveniles is often larger congeners. Intraspecific cannibalism is common for this predator.

The life of a young perch is full of dangers, therefore, until the period of sexual maturity (approximately 3-4 years), only five individuals per thousand of laid eggs survive. However, if you take into account the fertility of the predator , this is a good percentage of survival.

By the period of maturity, the variability of perch forms begins to manifest itself clearly. Most individuals grow slowly, gaining 1–2 cm per year. This small grass or coastal perch with characteristic stripes forms the basis of the species population. This is a typical schooling fish that lives a short distance from the coast and hunts almost near the surface of the water. Grass perches often do not become “purebred” predators: sometimes they eat mollusks, crustaceans, tadpoles, worms and other trifles that abound in coastal thickets until the end of their released years. Most ichthyologists call this species “slow growing”.

However, several more phenotypes (races) of this predator stand out, strikingly different from the ubiquitous “prototype”. Of these, the most famous is the fast-growing form – the humpback perch . This is already one hundred percent predator, in the diet of which fish clearly predominates. Unlike the slow-growing form, the humpback is a convinced loner that lives at considerable depths. What is interesting: in large humpbacks mainly females grow, which lay the lion’s share of viable eggs.

The lifespan of a perch depends not only on the phenotype, but also on the conditions of a particular reservoir (water quality, abundance of food supply, and so on). On average, jack perchs live almost as long as their deep brothers – about 10-15 years . However, the “oldest” recorded individual belongs to the second phenotype: the 23-year-old specimen caught in the Mongolian lake was almost 45 cm long and weighed more than two kilograms.

Determining the age of the perch

If you are hooked on a more or less solid specimen, it will probably be interesting to know how many years he lived in the world. As you can imagine, the rule “the bigger, the older” works even worse for perch than for other representatives of the ichthyofauna.

Unfortunately, the simplest way to determine the age of a fish , by scales, is not very informative for a perch: the scales are too small and thin, it is difficult to see the annual rings on them. But there is a wonderful opportunity to count them on the gill covers.

We act as follows:

We hope that not only beginners, but also experienced anglers have taken something new from this publication. We promise to continue to delight you with interesting materials about the life of various representatives of the ichthyofauna!