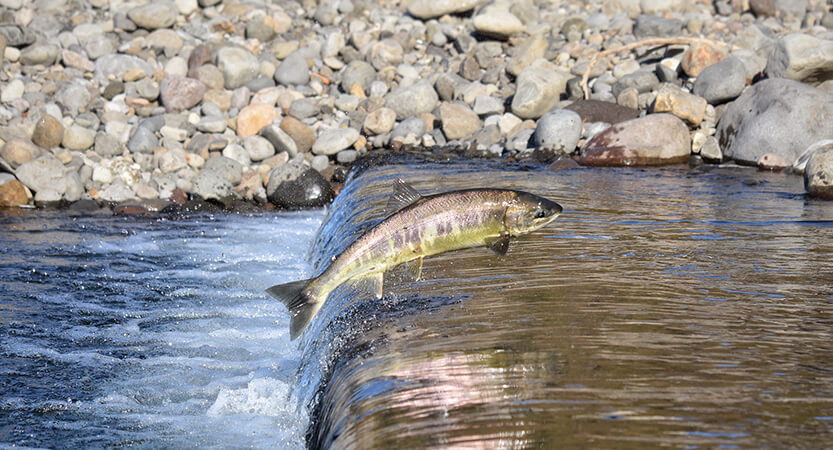 Large freshwater salmon, the natural distribution area of which is located in the European part of Eurasia. Huchen, Danube salmon (Hucho hucho) – these are also the frequently mentioned names of Danube salmon.

The general characteristics and behavior are similar to other representatives of the taimen genus. The maximum sizes can reach, in weight – 60 kg, and in length a little less than 2 m. I would like to note that the genus of taimen, at present, is represented by four species. The other three live in Asia. The so-called Sakhalin taimen (Japanese huchen) belongs to another genus. It differs from freshwater taimen not only in its way of life (migratory fish), but also in the morphological structure of its body. Although outwardly they are quite similar and are closely related species.

The Danube salmon has a slender, swollen body, but many anglers who have caught other taimen note that it is more “loose”. Body color is less bright than other species. Perhaps this is an adaptation to living conditions. For example, it is connected with the conditions of existence in rivers flowing in the loess zone, periodically stirring up water, or other rocks underlying the river bottom, with a specific color. Huchen is one of the largest freshwater predators in Europe. The main habitat is mountain rivers. It is an active predator, often hunting takes place in the upper layers of water. It is a protected species, listed in the IUCN Red Book. Fish, at the moment, are actively bred artificially, and not only in the zone of natural residence. In addition to the Danube basin, salmon has taken root in other European rivers and beyond.

The development of Huchen has some features typical of most salmonids. Females “mature” somewhat later than males, at 4-5 years. Spawning takes place in March – May, depending on the conditions of existence. Double spawning, passes on rocky ground. Fish guard the nest for a while. Fertility in taimen increases with age. Young females spawn about 7-8 thousand eggs. Juveniles feed on invertebrates, gradually moving to a predatory lifestyle.

The methods for catching huchen are similar to the broaching of other species of this genus, and, in general, large river salmon. Taimen actively hunts in different layers of water. But you need to take into account the moment that there are seasonal features. In Europe, taimen fishing is strictly regulated. The basic principle of fishing: “caught – released.” Before fishing, you need to clarify not only the size of the possible catch, but also the permitted lures, including the types and sizes of hooks. Amateur gear for catching Danube salmon are spinning and fly fishing rods.

Given the size and strength of the fish, it is worthwhile to responsibly approach the choice of spinning gear for salmon fishing. First of all, you need to focus on the weight of the baits and fishing conditions on fast, mountain rivers. Long rods are more convenient when fishing for large fish, but they can cause discomfort when fishing from overgrown shores or on difficult terrain.

The fishing conditions on the river can vary greatly, including due to the weather. The water level can vary and, accordingly, the flow rate. This affects the wiring and use of lures. The choice of a non-inertia reel must be associated with the need to have a large supply of fishing line. The cord or line should not be too thin. The reason is not only the possibility of catching a large trophy, but also because fishing conditions may require forced survival. Huchen prefers large baits, but exceptions are not rare.

Catching huchen for fly fishing. Fly fishing for taimen has its own characteristics. As a rule, lures are distinguished by their large size, which requires the use of more powerful rods up to 10-12 classes, both in two-handed and in one-handed versions. In certain seasons, the physical activity of the fish can be very high, and therefore in large reservoirs, after notching, taimen can make powerful jerks of several tens of meters. Therefore, a long backing is required. Fishing often takes place at dusk. This increases the requirements for reliability and durability of gear.

To catch the Danube salmon, a very large number of lures are used. This applies to both spinning and fly fishing lures. Unlike Asian counterparts, who rarely react to various silicone imitations, a huge number of baits of this type are used to catch babies. Among them, the so-called “Danube pigtail” – a kind of “octopus” with a lead head. In addition, various imitations of fish from artificial materials are used, in the form of “foam” and other things.
Traditional, rotating and oscillating spinners are also used, along with a huge number of wobblers of various sizes and modifications. Fly fishing lures used for fishing, as a rule, are imitations of the bottom inhabitants of the rivers. These are various bull-calves, minnow, etc. made from the corresponding materials – synthetic and natural fibers, foams, etc. The main feature, as in the case of the Siberian taimen, is its large size.

In addition to the natural range in the Danube basin, at the moment, taimen is settled in many rivers of Western Europe and even acclimatized in some rivers of North Africa. Populations of Danube salmon are in England, Canada, USA, Finland, Sweden, Switzerland, France, Spain, Belgium. In Eastern Europe, fish can be found in the basins of the Teresva and Terebli, Drina, Tisza, Prut, Cheremosha, Dunajec, Popradz, San, Bubr rivers, in the rivers of southern Germany. Besides Ukrainian rivers, Danube salmon was bred in the Don and Kuban basins.

Currently, you can find a large number of proposals for fishing taimen in Bulgaria, Montenegro, Slovenia, Poland and more. Fish is the dominant predator in the pond. Depending on the season and age, it can change the living conditions and location in the river, is the dominant predator. For the most part, he prefers to stay on various obstacles, lowering the bottom or places with a change in the speed of the current. The fish is very careful, with any possible threat, it tries to leave the dangerous place.