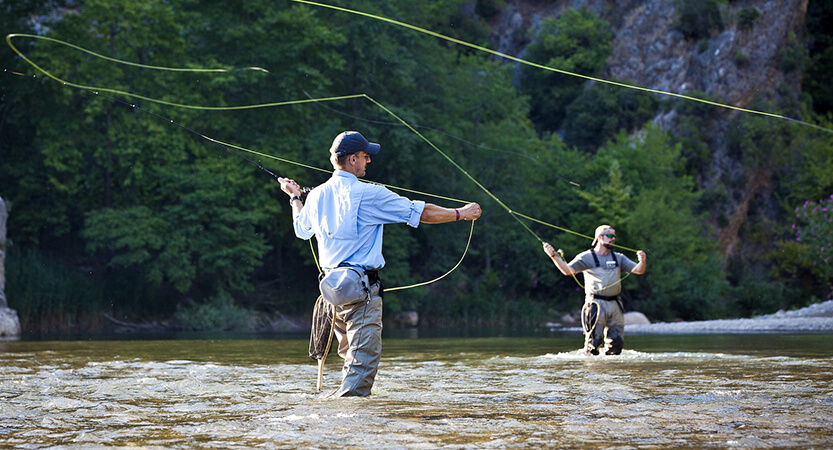 Modern fishing is akin to art: it concerns both the selection of tackle, and the technique and tactics of fishing. Some methods are more active and energy-intensive, others require from the angler, first of all, patience and perseverance. Each of us is free to choose something of our own, special and close in spirit. If your whole nature strives for something sophisticated and extraordinary, try your hand at fly fishing. This is a special art with a long history, a true sport for aristocrats.

This fishing method is very popular in America and some European countries. The fact is that this technique requires not only special gear, but also fairly long training sessions, including on land. But if you master it at least at the initial level, indescribable pleasure and megatons of adrenaline are provided. And we, to the best of our modest strength, will try to help you take the first steps in mastering this fishing art!

The device and application of fly fishing tackle

The device of the tackle is determined by the peculiarities of its use. Fishing is carried out at a shallow depth or even on the surface of the water, and the use of sinkers and floats is not provided. Fishing is possible both downstream (the main feature of most fly fishers), and in still water, from the shore or from a boat, and under any weather conditions . There are even offshore fly fishing options! In this case, any fish can become prey, from harmless bleak to toothy pike. The exception is, perhaps, the primordial bottom inhabitants, only occasionally rising to the surface of the water.

A layman may confuse spinning with fly fishing, but, with some similarity of the process, the technique has fundamental differences. The fact is that when casting a spinning rod, the dynamics of advancement is provided by the weight of the bait: spinners , wobblers , jig heads . When fishing with fly fishing, a different principle applies, because the weight of the bait (in most cases, flies) is negligible. In this case, the angler acts on the principle of a driver wielding a whip: the casting is provided by a special technique in combination with the original design of the tackle.

In the classic version, the fly fishing tackle consists of several elements, and their selection depends on the fishing conditions and the type of intended prey. All of them complement each other, providing the most accurate casting. It:

And now let’s get acquainted with each of the elements of the equipment in more detail.

A rod (blank, whip) is the main and most expensive piece of equipment. The fly blank looks like a lightweight spinning rod. The standard length is 2.7 m, but slight deviations in one direction or another are possible. Rods longer than three meters are used quite rarely: mainly, these are two-handed options (involving gripping the handle with both hands).

Rods are divided into classes (1-15). The class (power, test) is a characteristic that determines the ability of the blank to throw a lure of a certain weight in combination with a line to the desired point. It also indirectly testifies to the strength of the tackle: how much weight of prey the rod can withstand. The second important characteristic of the whip is its structure, that is, its rigidity. A rigid rod of fast action provides great aiming in windy weather , a flexible blank is indispensable for casting in conditions of a lack of space.

Fly fishing beginners should be advised of a medium action form, class 5-8 and a traditional length of 2.7 m – this option is the most versatile both in terms of fishing conditions and the choice of bait. It is worth opting for a CFRP or fiberglass rod (the cheaper option) with a cork handle (rubber and plastic do not provide such a reliable grip and comfort for the hand).

Despite the seeming convenience of spinning reels, fly fishers rarely use them. The fact is that the reel does not participate in casting in any way, so the speed and ease of winding the line out of the spool is of no fundamental importance. But the weight – yes, because with such intensive work with a rod, every gram is important. Therefore, fly fishing tackle, in most cases, is equipped with lighter classic high-capacity inertial reels .

When choosing a fly reel, the class of the rod is taken into account. Deviations are unacceptable, otherwise the tackle will be unbalanced, making it difficult to cast and leading to rapid hand fatigue, which kills all the pleasure of fly fishing.

In the traditional version, the reels are equipped with all the well-known ratchet brakes that slow down the drum from overrunning and excessive stretching of the cord. For catching small and medium-sized specimens, this is quite enough. But catching solid salmon or trophy pike requires the use of a friction clutch , which makes it easier to play and reduces the load on the tackle.

The reel must have sufficient capacity for winding at least 60 (and in some cases up to 200!) Meters of cord and fishing line, while spontaneous falling of them is unacceptable.

Now let’s move on to the fun part. The fact is that the line in this case consists of several segments with different characteristics. Their correct selection and pairing ensures not only accuracy, but also the very possibility of casting. As mentioned above, when manipulating the tackle, the only possible whip principle is used with light baits.

Rigging can consist of:

The classic fly fishing lure is an artificial fly , which does not necessarily mimic the corresponding insect. Previously, fishermen worked on their own to make flies, and this has become a true art. The first fundamental work on fly fishing in general and fly making in particular was published in the 15th century!

Nowadays, only avid fly fishermen are engaged in the manufacture of flies: most anglers prefer to purchase the necessary baits in specialized stores. Ready flies differ in the degree of realism: some exactly resemble living counterparts, others are similar to them only in general terms, and still others have no similarities at all in the existing world.

Artificial lures can be divided into two large groups in terms of their external design and the degree of buoyancy :

Sometimes live insects are used in various stages of development, but this is already the creative delights of fishermen or a forced necessity.

The fly fishing technique is quite complicated, therefore it is recommended to master it under the supervision of an experienced angler who is able to note and correct mistakes at the training stage, until they become a habit. Training on land is productive, with the main focus on practicing idle casting without bait. It is rational to use a short cord and not try to force long distances at first.

Now let’s go directly to the fishing technique and highlight the key points:

Casting . The most common and simple casting technique (if the word “simple” is generally applicable to fly fishing) is rhythmic back and forth swings. Unlike a sharp spinning cast, the movements are performed as smoothly as possible, otherwise there is a chance to confuse the rig or “catch” a nearby bush with it. It is important to hold the rod correctly: usually the thumb is located on top of the handle, however, when using ultralight blanks, the index finger can be placed there. If done correctly in this way, casts can be made at very decent distances.

Fly fishing in a confined space greatly simplifies the much more complex ring casting, in which the cord is fed not through the air, but from the water. Its development will take a lot of time, but on the other hand, almost all parts of the river will become available for fishing. Among the classic options are “dry” and “wet” casts, which are used in accordance with similar characteristics of the front sight. In the wet version, each swing finishes by splashing the bait; in the dry version, the front sight is dried in the course of several idle swings and only then touches the water.

Pulling up . Pulling up is an integral part of casting fly fishing tackle at a distance of over 12 m. In fact, these are movements of the left hand, imparting additional energy to the line fixed in it. To do this, you need to fix the cord in your left hand opposite the reel and start performing idle casts. At first, the workout is simply to control the tension, and then you should vigorously pull 10-15 cm of the cord while swinging back and forth. To increase the range, a double pull-up is used: on the movement of the blank both forward and backward, and it works up to one and a half meters of the cord. Without practicing this muscle skill, it is impractical to switch to real fly fishing in a reservoir.

Posting . Unlike spinning fishers, fly fishers do not always use active postings: in this case, the main task of the angler is to correctly feed the front sight and adjust the speed of its advance. When fishing on the river, it will be tempting to be swept away by the current until it almost hits the shore – that’s all the wiring for a beginner. Any manipulation of the coil (stripping) is used only in stagnant water conditions and a very slow coastal current.
If the current is too fast, rapidly sweeping the fly away even before the fish reacts, mending is used (special manipulations with the rod, and sometimes with the line), which slows down the movement of the bait. In this case, the fisherman, with a swing of the blank and with his left hand, shifts the cord towards the middle of the river. There is also an accelerating mending, for a slow current – in this case, the cord is shifted closer to the shore.

Rescue . When biting, the fish intensively exhausts the line, and the angler’s task is to smoothly stop its movement at the right time. In this case, we are talking about an honest fight with a trophy: the fishing of large specimens lasts a long time, because the prey must first be properly worn out so that it will allow itself to be brought to the shore and the substituted landing net. The angler keeps the line moderately taut when the blank is upright, while limiting the movement and jerking of the fish. It is necessary to gently bring the fish to the chosen place, periodically giving it a breath of air and laying the prey on its side – this will gradually reduce its activity.

We hope that you will start learning the basics of fly fishing under the guidance of an experienced master of the art of fly fishing. But if this is not found, we recommend reading more highly specialized literature and listening to our practical advice:

Fly fishing is the greatest aesthetic pleasure and a lot of excitement. Yes, assembling the tackle and mastering the technique will take a lot of time, but it’s worth it: everything exclusive is not given just like that. We wish you to find yourself in this type of elite fishing, and we will provide the theoretical component of the learning process and reveal the practical secrets of experienced anglers!